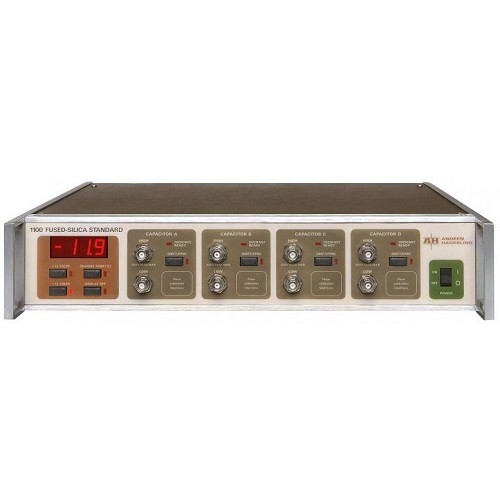 The World's Most Stable Capacitance Standard in commercial production

The Andeen-Hagerling AH 1100 capacitance standard frame contains from one to four AH 11A fused-silica capacitance standards, and provides reference capacitors of unexcelled stability. The frame provides the electrical power to operate the precision temperature-controlled oven that is part of each AH 11A. The frame also provides the metering circuits that monitor internal power voltages and temperatures.

A three-terminal connection to each standard is made independently from pairs of BNC connectors on the front of the AH 1100. The inherent stability of this system when subjected to mechanical or thermal shock makes it the ideal transfer standard for capacitance. The built-in precision temperature controllers make it a simple, reliable system to use.

These are the only standards currently sold that are sufficiently accurate to calibrate the AH 2500A capacitance bridge to the limits of its specifications.

Each AH 11A standard has, as its basic element, a fused-silica disc which is used to form a set of capacitors having values that are binary weighted. Factory selection of the appropriate capacitors from this set allows the AH 11A to be offered in a wide range of very accurately set values. Final trimming of the value is achieved by a small adjustment to the temperature of the oven. This method avoids the introduction of a separate trimming capacitor with its associated instabilities. Thus the dielectric of the AH 11A is very nearly 100% solid fused silica.

The fused-silica disk is hermetically sealed in a copper chamber that is thermally well insulated from the outside case of the AH 11A. The temperature of this chamber is measured by two precision temperature sensors, connected to two totally independent monitoring circuits. The average of the output voltages produced by these two circuits is used to control the temperature of the copper chamber. The difference in these output voltages may be selected for display on the front panel of the AH 1100 frame. As the standard ages, this difference should remain near zero. The smaller the difference, the greater the confidence in the stability of the oven temperature.